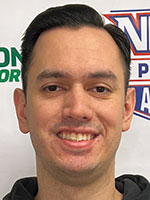 Christian graduated from Lackawanna Trail in 2008 where he lettered 3 years as a varsity basketball player and was a 2008 Lackawanna League All Star. He earned his Bachelor of Science in Sport Management with a minor in Business Administration from Drexel University and was a Practice Player for the Women’s basketball program (2009-2013) that won the postseason WNIT tournament in 2013. Head Coach at Lackawanna Trail High School from 2014-2020 (6 seasons) where he produced 3 Lackawanna League First Team All-Star players and 4 Lackawanna League Honorable Mention players. During the 2018-2019 season, led Lackawanna Trail to its first AA District II playoff win since 2013 and an appearance in the AA District II semifinals. In the following 2019-2020 season his team competed for a Lackawanna League Division IV championship, won another AA District II playoff game, and appeared again in the AA District II semifinals. The Lions posted a 14-10 overall record in the 2019-2020 season – the school’s first overall winning record for the program since 2010. Currently Christian is the Assistant Varsity & Head JV Coach at Mid Valley High School. Christian’s current job responsibilities at Riverfront Sports include managing and overseeing all the administrative and logistical aspects of our basketball programs.