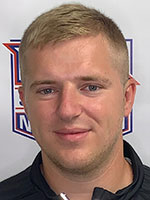 Attended West Scranton High School where he played Soccer and Basketball and received Most
Outstanding Athlete, 2X Lackawanna League All Star and Lettered in both sports. Tyler went on
to attend and play Soccer at Misericordia where he received the 202 LIAA Girls Division 2 Coach
of the Year Award. Tyler then went on to coach 1 year at Riverside as Jr. Head Coach and is
currently in his 2nd year as Head Coach at Western Wayne High School for Girls Varsity. Tyler
has received his NFHS Concussion Protocol Training and NFHS Cardias Arrest Protocol Training
certifications. Tyler’s job responsibilities at Riverfront Sports involve him preparing all the
scheduling for the Facility, as well as getting leagues, clinics, programs up and running and
making sure there is continued success in all programs. Tyler is also the current Head Coach for
Riverfront United 2008 team and is available for Individual and small group training for Soccer.